What to Expect From the 2016 Chevrolet Cruze 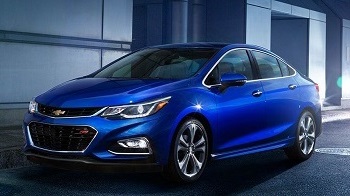 The newest sedan in the Chevrolet lineup, the Chevy Cruze, is already undergoing changes! The 2016 Chevy Cruze is sleeker and more powerful than ever before for a new generation of agile, efficient power. You’ll love driving the Cruze to work, around town, or just for fun. Check out what the new generation of the Cruze means for you!

A new design means new architecture. The 2016 Chevy Cruze has been designed using the new Chevrolet D2 architecture, a simplified and versatile platform that will be underpinning the majority of Chevy vehicles coming out over the next few years. This front-drive-focused architecture gives the Cruze a longer wheelbase by half an inch, plus a chassis that’s longer by two and a half inches.

The overall design has changed, as well. The original Cruze was boxy and square; the new Cruze is sleek, aerodynamic, and expressive. In addition, the body is lighter by about 250 pounds for better handling and performance. You’ll also be able to purchase a hatchback Cruze for the first time ever.

You’ll get a contemporary and fresh look with the redesigned interior of the 2016 Chevy Cruze. Chevrolet is using more premium materials than ever before for a more comfortable cabin, along with adding two additional cubic inches of legroom for the rear seat. The seven-inch touchscreen has been moved to the center of the dash for ease of use, along with the intuitive, simple climate controls and the attractive vertical air vents. The touchscreen also supports the MyLink program, which can be used with both the Apple CarPlay and Android Auto programs.

The 2016 Chevy Cruze sees a brand new EcoTec engine, the latest fuel-efficient offering from GM. The new engine is a 1.4L turbocharged engine that produces 153 hp and 177 lb-ft of torque. You’ll get an impressive fuel efficiency of 40 highway mpg, as well as an acceleration of 0 to 60 in just 8 seconds. The engine is made of steel and aluminum for a lighter weight.

In addition to the new engine, Chevy has designed the new Cruze with attention to weight and performance. The new chassis is lighter than ever before, while the body is stiffer for better handling. The new suspension system and electric steering system provide great control, while the pared-down shape makes for great speed and agility.

For more information about the upcoming 2016 Chevrolet Cruze, contact us at Tom Gill Chevrolet today!