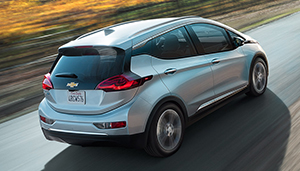 If you’re like most parents, then handing the keys over to your teen driver can cause all kinds of anxiety, worrying, and sleepless nights. The experts at Chevy understand what keeps parents up at night, which is why they’ve developed a variety of advanced teen driver technologies to help keep your newly licensed child in check. This year, Chevy is expanding this tech across a wide swathe of 2017 models. Find out more about this technology, how it works, and which models it will be equipped on before making your way to Tom Gill Chevrolet in Florence, KY.

The Teen Driver technology that Chevy is offering is vast and effective. To start, it is offered with a vehicle “report card” that cues parents in to the vehicle’s maximum speed, the distance it has been driven, and the number of times the anti-lock brakes, traction control system, and autonomous emergency braking systems have been engaged. The 2017 version of this system now comes with a Teen Drive key fob as well, which allows parents to set max audio volume and max speed limits and logs information for throttle and tailgating. Additionally, if the driver and front seat passenger don’t have their seatbelts locked in, the audio is disengaged, and safety features like lane departure warning and stability control are impossible to disengage.

Which Models Will Are Offered with Teen Driver Technology?

If you’re looking to buy a model in the 2017 Chevy lineup, you’ll have a variety of different vehicle options that are offered with these exciting teen driver technologies. Models offered with this equipment include:

Here at Tom Gill Chevrolet, we’ve got the entire lineup of new Chevys in stock—including a vast array of models equipped with Chevy’s advanced teen driver tech. Stop in to take a tour of the vehicle you’re interested in, call our experts to about the various technologies, and secure competitive financing at our dealership, located near Cincinnati at 7830 Commerce Drive in Florence, KY.