The Chevrolet Volt is the automaker’s premier hybrid car with an efficient and eco-friendly engine, plenty of high-tech features, and power you’ll appreciate. It’s been redesigned this year with a new look and improved efficiency.  If you’re looking for the hot new hybrid in the Florence and Cincinnati area, head over to Tom Gill Chevrolet.

The 2016 Chevrolet Volt has been redesigned in a big way for the new model year. Outside, the 2016 Chevrolet Volt gets a much-needed facelift. Customers who loved the Volt asked GM for a sporty new design that would match its effortless power, and GM stepped up to the plate. The new Volt is designed to look aerodynamic, with each component flowing together. The lines of the fenders move into the hood, while the body sides have a sleek look that gives the Volt its classic Chevrolet performance. The new chassis also contributes significantly, replacing some older materials with aluminum alloy in strategic areas.

Inside, the cabin has been revamped for a more sophisticated feel, with a new color scheme and intuitive switchgear and panel controls. The new powering units remove even more weight while adding much-needed power and efficiency, with a lower center of gravity for better handling. 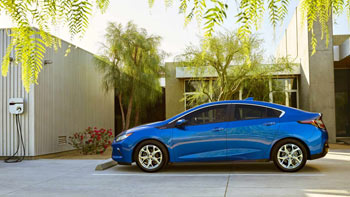 The 2016 Chevrolet Volt features two electric motors working in tandem, which draw power from a lithium-ion battery pack that stores 18.4 kWh of energy in a much more compact space than before; its total weight is 100 pounds less than the 2015 model’s, and the design ensures that the electric motor magnets use fewer expensive rare earth minerals. The electric motors produce 149 hp and an impressive 294 lb-ft of torque, in conjunction with a 1.5L four-cylinder gas engine that produces 101 hp. While the four-cylinder can be used on its own as a range extender once the battery is depleted, it’s mostly in place as a generator that sends power to the battery pack.

While the battery weighs less, so does the entire system. This means not only quicker acceleration, but also a climb to a 50-mile range on the electric engine alone. When fully charged and gassed up, you’ll get an impressive range of 420 miles and fuel economy of 41 mpg average. 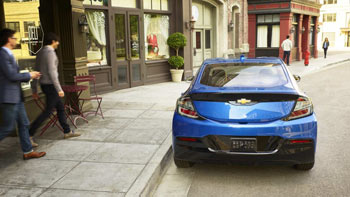 The 2016 Chevrolet Volt is slated to offer a host of features. You’ll get a unique type of control to decelerate and adjust the amount of braking energy regenerated that you can send to the battery pack. You’ll also get a GPS-based charging system that will initiate a charge time when the Volt is plugged in at a non-home location, along with a charging cord that’s slimmer and has a storage area in your car.

The current Chevrolet Volt features a base model with standard features like keyless and remote ignition and entry, OnStar telematics and in-car Wi-Fi, and the Chevrolet MyLink system with voice-controlled audio functions, Bluetooth connectivity, and more. You can also opt for the Premium trim with leather-heated seats, one of several Enhanced Safety packages with upgraded safety options and features, and a navigation system. 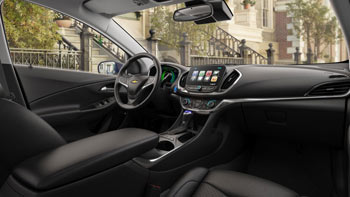 The 2016 Chevrolet Volt is priced starting at $33,170. Since this is an alternative energy vehicle, the 2016 Chevy Volt may be eligible for state and federal tax credits. With a full $7500 federal tax credit, the Volt price falls as low as $26,495. Not to mention you’ll be cutting down on your fuel costs driving a hybrid car. 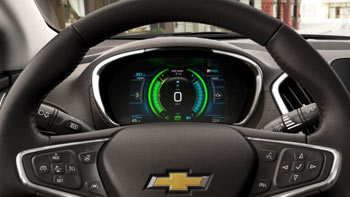 Auto critics across the board have expressed their excitement about the 2016 Chevrolet Volt. 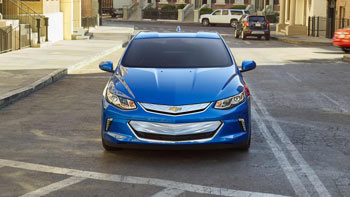 The 2016 Chevrolet Volt Awaits You at Tom Gill Chevrolet

Can’t wait to get your hands on the 2016 Chevrolet Volt? Get in touch with Tom Gill Chevrolet or visit our dealership. We’re a short drive from Cincinnati in Florence, KY at 7830 Commerce Drive.