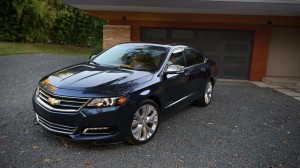 Here at Tom Gill Chevy in Florence, KY, we’re excited to announce that Chevrolet has topped all other automakers when it comes to making the safest lineup around! Chevrolet took home seven five-star overall vehicle scores from the NHTSA – that’s more than any other manufacturer, and more than Ford and Toyota combined! The National Highway Traffic Safety Administration – the government body that crash-tests all new cars – awarded Chevy with seven five-star crash test ratings this year.

These scores come after the NHTSA upgraded their crash testing program to be tougher for 2011. The NHTSA has been running tests since 1978 – so you know that they know about vehicle safety. The NHTSA New Car Assessment Program tests new models for front, side, and side-pole crash tests, along with rollover safety. Every vehicle gets a score from zero to five stars in every category, as well as an Overall Vehicle Score. While the overall vehicle score doesn’t tell you how each test was scored, it’s widely referenced for quick comparisons of vehicle safety.

The seven vehicles that got a five-star overall score from the NHTSA are as follows:

Chevy vehicles are distinguished by their outstanding crash-safety scores and their high-tech preventative safety features. For instance, new Chevy vehicles can be equipped with the Safety Alert Seat, which can help warn you about possible hazards when paired with the Forward Collision Alert and Lane Departure Warning systems. New Chevrolet vehicles can also be had with a sophisticated Rear Cross-Traffic Alert and Side Blind Zone Alert system. All Chevy vehicles get the OnStar telematics system with Automatic Crash Response, enhanced roadside assistance, concierge services, and more.

Come check out all the safe vehicles from Chevrolet at Tom Gill Chevy, your local Cincinnati area Chevrolet dealer. We’re proud to be able to offer these vehicles, which can help keep you, your family, and every one else on the road safer. We hope to put you behind the wheel of a new Chevrolet today!