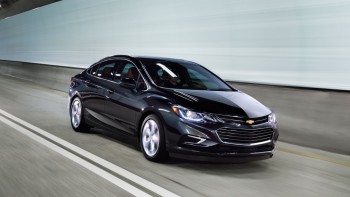 After a solid run during its first generation, the 2016 Chevrolet Cruze returns to the small sedan segment this year with a total redesign. Lots of critics are already starting to weigh in, and the consensus is overwhelmingly positive. From confident performance to its spacious, well-equipped cabin, there’s plenty of praise for this year’s Cruze. Check out what the 2016 Chevrolet Cruze reviews look like, and then make your way to Tom Gill Chevrolet to decide for yourself.

The 2016 Chevrolet Cruze is indeed the most fuel-efficient version of this model to date, thanks to its turbocharged 1.4L engine, which is capable of achieving up to an EPA-estimated 42 mpg highway and 30 mpg city. Still, you’ll get a confident 153 hp and 177 lb-ft of torque.

Edmunds: “The redesigned 2016 Chevrolet Cruze cranks up the content and style while remaining affordable and fuel-efficient.”

This truly is the most substantial Chevrolet Cruze yet produced. Available in four different trim levels, the Cruze starts at just $16,620 and comes standard with the OnStar telematics system, a 4G LTE Wi-Fi connection, Bluetooth, Apple CarPlay, Android auto, a rearview camera, and the Chevrolet MyLink system with a 7-inch touchscreen interface.

Car and Driver: “The Cruze cuts a distinctive profile with its boldly sculpted lines, featuring a roomy interior and a zippy engine to make it a legitimate contender among compacts.”

The 2016 Chevrolet Cruze returns with a stretched out frame that makes it more inviting and spacious. One noteworthy difference is that the latest rendition can comfortably accommodate two or three passengers in back. In fact, the new Cruze adds 3 inches of overall length and 2 inches of additional legroom in back.

Make the 2016 Chevrolet Cruze Your Car at Tom Gill Chevrolet

Now that you know what some of the major auto critics are saying in their reviews of the all-new 2016 Chevrolet Cruze, you’ll want to get behind the wheel to check it out for yourself. We invite you to take this new model for a spin at Tom Gill Chevrolet, located at 7830 Commerce Dr. in Florence, KY. We’re just a short drive from Cincinnati, and you can reach out to us directly seven days a week!