How do the 2015 Chevrolet Camaro Trim Levels Compare? 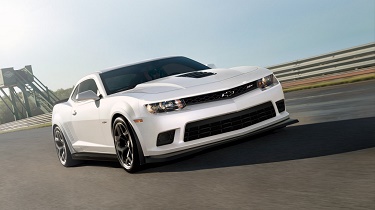 If you’re looking for a great performance car with incredible power, the 2015 Chevy Camaro might be the ride for you! This performance vehicle featured four-seat coupe and convertible models, with six trim levels to choose from — and plenty of options for the discerning buyer. Read on to find out about the different Camaro trims and their features!

The base 1LS level of the 2015 Chevy Camaro had a range of convenience features, including

The Camaro 1LT level adds features such as remote start with an automatic transmission, power front seats, and the Chevy MyLink infotainment system with a smartphone app integration and a 7-inch touchscreen. With the convertible, you’ll find a power-operated soft top, as well as safety features like a rearview camera and rear parking sensors.

Drivers looking for a 2015 Camaro SS for sale know exactly what they want — track-inspired performance. We’re just here to break down the differences between the 1SS and 2SS.

The 1SS is where the 2015 Chevy Camaro starts to get really sporty. With this trim you’ll find performance features like a limited-slip rear differential and a special sport-tuned suspension, plus a leather-wrapped steering wheel.

The 2SS adds all of the comfort and convenience features that come on the 2LT. You can also opt for the 1LE Performance package with a manual transmission, which adds racetrack-inspired customization such as a unique gearing system, special racetrack suspension tuning, and racing tires.

If you’re looking for a 2015 Chevy Camaro, be sure to check our pre-owned inventory and reach out to let us know that you’re interested. If you’re just taking a trip down the Camaro’s history, browse our selection of new Chevy Camaro models — we think you’ll like what you see when you visit Tom Gill Chevrolet.

0 comment(s) so far on How do the 2015 Chevrolet Camaro Trim Levels Compare?