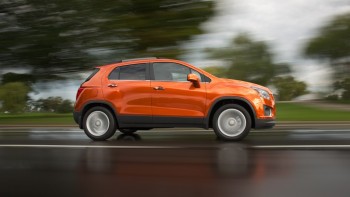 Looking for a snappy crossover SUV that’s perfect for maneuverable city driving? The brand new 2015 Chevrolet Trax is a car made for you! But don’t just take our word for it; car critics are loving the latest addition to the Chevy lineup, currently available at Tom Gill Chevrolet in Florence, KY.

Edmunds.com is a fan of the size and fuel efficiency of the 2015 Chevy Trax, saying, “Imagine the perfect 21st-century city vehicle. It would be small enough to fit into that tight parking spot, yet roomy enough to carry your friends, their guitars and a couple of amps. It would also have a raised ride height to let you see around traffic, and its modest fuel consumption would leave plenty of money in your bank account. And while the price tag would be affordable, said vehicle wouldn’t skimp on must-have technology like Bluetooth or smartphone integration features. Enter the 2015 Chevrolet Trax, one of the most recent additions to the emerging subcompact crossover SUV class.”

The 2015 Chevrolet Trax is just 167 inches long and 70 inches wide, smaller than any of the other Chevrolet SUVs. However, there’s plenty of headroom and legroom for passengers in the front and the back, and the rear luggage area provides 18.7 cubic feet of cargo space when the seats are up, with 48.4 cubic feet when the rear seats are folded down. The fuel efficiency is respectable for an SUV as well, with EPA rating of 34 highway mpg.

Car and Driver Loves the Performance

Car and Driver says, “[T]he Trax is designed to appeal to an audience that places a priority on style, connectivity, and practicality…[the] engine—also shared with the lighter Sonic sedan and hatchback—is reasonably responsive, and its turbocharger operates with little lag.”

The turbocharged engine with its 1.4L four-cylinder motor and six-speed automatic transmission, means that the 138 hp and 148 lb-ft of torque pack more of a punch than you would imagine. The ride is smooth and controlled yet firm, and there’s plenty of pep and response during city driving.

The Car Connection says, “[T]he 2015 Trax entering the U.S. market gets several new features plus a structural upgrade to handle tougher new crash-safety tests. With added sound insulation, the U.S. Trax may be one of the more quieter small utilities on the road, and conceivably more refined than simpler Trax versions sold in more than 60 other countries.”

The 2015 Chevrolet Trax received a five-star rating for safety in government crash tests, as well as garnering a perfect score of “Good” in the crash tests from the Insurance Institute for Highway Safety.

Check out the Trax at Tom Gill Chevrolet