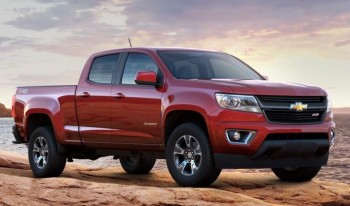 Just because the 2015 Chevy Colorado is a smaller-sized truck doesn’t mean it is not rugged, versatile, and capable of handling all the demands of work and recreation. In fact, when you dive into the 2015 Chevy Colorado specs, they reveal this deceptive truck can compete directly with some of the models in the class above it. Learn more about it’s power and durability, and then make plans to visit Tom Gill Chevy in Florence to put one to the test on the road.

The 2015 Chevy Colorado is available with two distinct powertrain options. The baseline trims come with a 2.5L four-cylinder engine that puts out 200 hp and 191 lb-ft of torque. If you require more power, no problem. You also have the option to go with a 3.6L V6 that generates an impressive 305 hp and 269 lb-ft of torque. Both come standard with a six-speed manual transmission, but an automatic is available as well. Both powertrains are also available in either front-wheel drive or four-wheel drive.

The 2015 Chevy Colorado specs reveal this pickup is perfect for both regular city driving, and loaded-down excursions. Fuel economy can reach a best in class 26 mpg on the highway with the V6 engine, meaning you will pay far less for gas over the lifetime of the vehicle. But when you need to focus on power more than efficiency, you can count on a properly-equipped Colorado to tow up to 7000 pounds and haul 1600 pounds.

Learn More About the 2015 Colorado at Tom Gill Chevrolet

Head to Tom Gill Chevy this fall to check out the all-new 2015 Chevy Colorado in person. We are conveniently located at 7830 Commerce Drive in Florence, KY. This model has been fully redesigned, and you are not going to want to miss us. Feel free to contact Tom Gill Chevrolet to learn more and schedule a test drive!