The 2015 Chevy Colorado Wins Motor Trend Truck of the Year 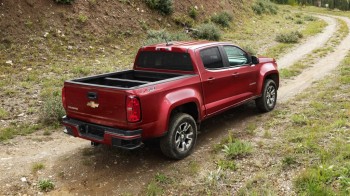 The redesigned 2015 Chevy Colorado took home Motor Trend’s Truck of the Year Award in a major upset by a rare unanimous decision. The Colorado took on a total of 10 other competitors, including the also redesigned 2015 Ford F150, a truck nameplate that has been a top seller for a very long time. The Colorado had taken three years off from production for a complete overhaul, but the 2015 model is making quite a statement with its comeback. A little smaller than it’s competitors, it’s not the biggest truck on the market, but after rigorous testing, Motor Trend has decided it is the best. Come learn more at Tom Gill Chevrolet.

The trucks underwent an extremely intense testing that tested their performance with and without payloads. First there was a series of tests without a payload or doing any towing. These included a zero to 60 mph acceleration test, a quarter mile acceleration test, a 60 to zero mph braking test, and finally a maximum lateral grip test.

Following that there was a grueling 250 mile trip to determine fuel economy and ride quality. The testers drove to Arizona’s Davis Dam to simulate a passing situation while carrying a load. The Dam is famous for being a proving ground for truck testing and didn’t disappoint.

Motor Trend then moved on to a proving ground for instrumented acceleration tests while weighted. This testing also included a trailered maneuverability and visibility test. This portion of the tests concluded with a 21 mile course through the Hualapai Mountains in Arizona.

After completing the driving tests, the cars were brought back to Motor Trend’s headquarters to do instrument testing. The trucks were hooked up to a “Real MPG” tracking system, and driven around an 88 mile trek around the city.

To make the final decision, a select group of Motor Trend editors came together after all the testing to vote. The victor was the truck that had the most votes in each of the 6 categories: Design Advancement, Engineering Excellence, Efficiency, Safety, Value, and Performance of Intended Function. The Chevy Colorado took the most votes in the most categories, and won Motor Trend Truck of the Year.

At Tom Gill Chevrolet in Florence, we carry the full Chevy truck lineup. That includes the full-size 2015 Chevy Silverado 1500 and the all-new 2015 Chevy Colorado. You can find us at 7830 Commerce Drive where we’re only a short drive from Cincinnati.