CALL US FIND US
You Are Here: Home > The Affordable 2016 Chevrolet Cruze Price

Affordability, efficiency, and style are the name of the game when it comes to the 2016 Chevrolet Cruze, which stands as a pinnacle in the compact car segment. An accessible starting MSRP from $16,620 gets you some of the most advanced technology on the market, and as you move through the trim lineup, you’ll have the opportunity to incorporate features such as remote start, heated front seats, and ambient lighting for only slightly more. See what’s in store at each 2016 Chevrolet Cruze price point before choosing the trim and package options that best suit your driving needs at Tom Gill Chevrolet. 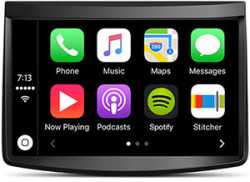 Every version of the 2016 Chevrolet Cruze is powered by a turbocharged 1.4L four-cylinder engine with start/stop technology. This setup makes a capable 153 hp and 177 lb-ft of torque while also achieving up to a noteworthy 42 mpg highway and 30 mpg city, according to EPA estimates. Also standard on all Cruze models is a three-month trial of a 4G LTE Wi-Fi hotspot, a suite of 10 airbags, a rearview camera, LED daytime running lamps, Bluetooth, and the Chevy MyLInk touchscreen with Apple CarPlay and Android Auto. The base L trim has an MSRP from $16,620.

The next model in the 2016 Chevrolet Cruze trim lineup is the LS, which starts at an MSRP from $18,120. This upgrade gets you a six-speed automatic transmission, as well as creature comforts in the form of a center console with an armrest, a compass to point you in the right direction, and floor mats to keep your car cleaner.

Opt for the 2016 Chevrolet Cruze LT, and the 2016 Chevrolet Cruze promises a three-month trial subscription of SiriusXM satellite radio, a six-speaker stereo system, LED daytime running lamps and a 60/40 split-folding rear seat. The latter makes for a completely customizable compact car, meaning you can easily accommodate passengers and cargo alike. Tacking on the convenience package to the 2016 Chevrolet Cruze LT adds an eight-way power driver’s seat, remote and push-button start, and heated front seats to the mix for a slightly higher price. The LT has an MSRP from $19,820.

As the topmost trim in the 2016 Chevrolet Cruze lineup, the Premier model boasts ambient lighting, leather-appointed seating surfaces, a heated, leather-wrapped steering wheel, and 17-inch aluminum wheels. This model will cost you from $23,120 MSRP.

Buy the Chevy Cruze With the Tom Gill Advantage Price

Now that you have a better sense of what the 2016 Chevrolet Cruze promises at each price point, come explore your options at Tom Gill Chevrolet. No matter what vehicle you choose, every price is clearly marked thanks to the Tom Gill Advantage Price. We’re located at 7830 Commerce Drive in Florence, KY, and you can always reach out with questions!