The 2017 Chevrolet Bolt Release Date is Just Around the Corner 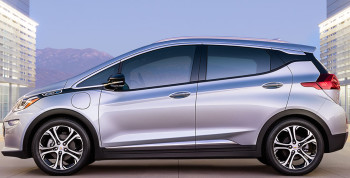 For quite a while now, drivers in the Cincinnati area and throughout the country have been getting amped up as they await the upcoming arrival of the all-new 2017 Chevrolet Bolt. New information is starting to trickle in, which reveals more about the impending release date for this all-new EV from General Motors. Find out more about the production and upcoming availability of this all-electric hatchback, and get ready to secure your very own at Tom Gill Chevrolet in Florence, KY.

Ramping Up Production of the 2017 Chevy Bolt

We might not yet have an official release date for the 2017 Chevrolet Bolt, but we do know that GM is currently keeping pace with production to start making vehicle deliveries to dealerships before the start of 2017. They are currently increasing production of the this all-electric hatchback at the Orion manufacturing facility, where it is being produced alongside the Chevy Sonic.

What We Know About the Bolt

The Chevy Bolt is set to be the next big offering from GM in terms of alternatively fueled vehicles. With a starting MSRP from $37,495, the Chevy Bolt will run on an all-electric powertrain with a total EPA-estimated driving range of 238 miles. It will feature highlights like an 11.2-inch diagonal color touchscreen, a rear vision camera, and an available surround-view camera, and it will be offered in both LT and Premier trim levels. The cargo area will be adaptable to your needs thanks to its fold-flat seats and available hidden storage compartment. On top of all that, it looks like the Bolt will be able to gain 25 miles of driving range per one hour of charge with the available 240-volt charger, while an available DC Fast Charging capability gets you 90 miles of driving range in around just 30 minutes.

Are you ready to get your hands on the 2017 Chevrolet Bolt? Look for it to arrive sometime in the next month or two at Tom Gill Chevrolet. We’re located just south of Cincinnati over the Kentucky border at 7830 Commerce Dr. in Florence, KY. If you have questions about this model or want more information about the dealership, feel free to get in touch.