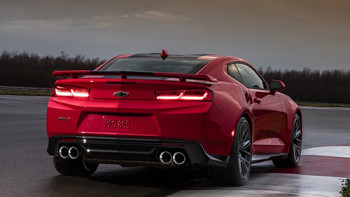 General Motors is bringing back a classic in the muscle car segment with the upcoming release of the all-new high performance 2017 Chevrolet Camaro ZL1. Chevrolet’s ZL1 models go back to the early days of the Camaro in the late 1960s, and the newest version of this world-class supercar is already proving itself worthy of its legendary namesake. Check out the commanding capabilities of this all-new model before it arrives at Tom Gill Chevrolet in Florence, Kentucky.

At the heart of the 2017 Chevrolet Camaro ZL1 is a supercharged 6.2L V8 engine mated to either a six-speed manual transmission or an eight-speed automatic transmission with paddle shifters. This powertrain will produce a staggering output of 650 hp and 650 lb-ft of torque, which will be sent to the rear wheels.

It should come as no surprise that the 2017 Chevrolet Camaro ZL1 is set to deliver a blistering performance out of the gate, but also noteworthy is that Chevrolet built this version of the Camaro to deliver arguably the most sophisticated driving dynamics ever for this model. That’s because of its use of GM’s Magnetic Ride Suspension with magnetorheological dampers and precision steering work for a sharp response in a variety of conditions.

Get Ready to Experience the 2017 Chevrolet Camaro ZL1 Performance

The 2017 Chevrolet Camaro ZL1 will deliver inspired performance that won’t soon be forgotten. If you’re ready to find out more about this historic model, then get in touch with the team at Tom Gill Chevrolet, or stop by our dealership at 7830 Commerce Dr. in Florence, KY, just a short drive from Cincinnati.