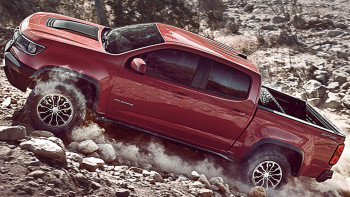 Chevy has just unveiled the 2017 Chevrolet Colorado ZR2, a new version of the Colorado, at the Los Angeles Auto Show. This special edition version of the midsize Colorado pickup promises serious off-road prowess across the board, and you can get ready for its arrival at your Cincinnati area Chevy dealer—Tom Gill Chevrolet in Florence, KY.

The 2017 Chevy Colorado ZR2 has been raised two inches on its suspension and features serious off-road hardware in the form of spool-valve dampers, heavy duty shock absorbers specifically designed for rough terrain, 31-inch Goodyear Duratrac tires on 17-inch wheels, skid plates, and a spare tire carrier mounted right into the truck bed. On top of all that, this version of the Colorado is 3.5 inches wider than the traditional Colorado pickup, helping to increase its stability on rough terrain.

The 2017 Chevy Colorado ZR2 backs up its commanding off-road profile with a couple of confident powertrain options:

When Can I Get It?

There’s not yet a release date available for the 2017 Chevy Colorado ZR2, but General Motors says that you can expect to see it rolling into your local Chevy dealership in the spring of 2017.

While the all-new 2017 Chevy Colorado ZR2 isn’t yet available, you can find the current model year of the Chevrolet Colorado on sale at Tom Gill Chevrolet, your Cincinnati area Chevy dealership. You can find us at 7830 Commerce Dr. in Florence, KY, and you can contact us directly at (855) 977-0189. Our doors are open for sales seven days a week.