A Look Ahead at the 2017 Chevrolet Silverado HD Design Changes 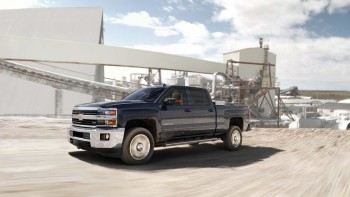 Early glimpses of the 2017 Chevrolet Silverado HD hood scoop design have us really excited. It will give these heavy-duty pickups a sportier look, resembling the hood scoops found on muscle cars and old-school performance trucks. The purpose of this hood scoop isn’t just skin deep, though—it serves a larger purpose, as well.

The Real Purpose for the Hood Scoop

Increased density of cold air coming into the engine from outside helps the engine to push more fuel through its combustion chamber. Under the hood, the air remains hot because of the engine’s heat, so pulling in cooler air means increased fuel transfers. In fact, it appears that 60% of the air that goes into the Silverado HD’s engine will come from the hood scoop. The result of the increased fuel movement is a boost in both performance and fuel economy, which is a total win-win situation.

While full details on the release of the 2017 Chevrolet Silverado HD aren’t yet available, you can find out the latest information as it comes in by staying in touch with Tom Gill Chevrolet. In the meantime, check out the current lineup of Chevy Silverado 2500 and 3500 pickups on sale now at 7830 Commerce Dr. in Florence, KY.