CALL US FIND US
You Are Here: Home > Reviews of the 2017 Chevrolet Camaro

Reviews of the 2017 Chevrolet Camaro

When it comes to American sports cars, few are as iconic as the Chevy Camaro, and the 2017 Chevrolet Camaro reviews are proof that this car is living up to its reputation. After a redesign last year, performance is king, and Kelley Blue Book has praised this year’s muscle car for its “big V8 rumble” and sophisticated “handling and braking.” Edmunds has great things to say about its “newfound levels of handling and performance.” Topping it off, Autoblog says the newest Camaro is “leaner, meaner, and true to its heritage.” Find out more about the newest version of the Camaro, and take it for a drive at Tom Gill Chevrolet. 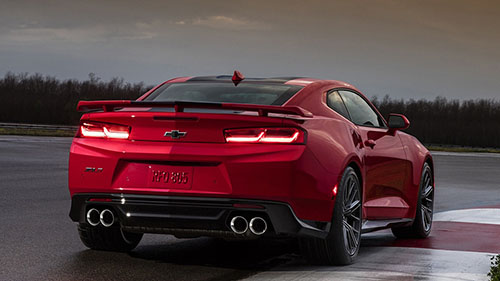 “The new Camaro offers the kind of handling and braking that was once the exclusive purview of higher-end European sports coupes and sedans, all with distinctly American styling and big V8 rumble.”

The Chevy Camaro’s redesign puts a whole new emphasis on performance, and this wasn’t just with a new lineup of engines. In fact, the Chevy Camaro challenges and redefines its muscle car status with a finely tuned suspension, refined steering work, and premium Brembo brakes. This all adds up to a level of sophistication that was once unheard of in this segment.

“In the search for a sporty two-door coupe, you're more than likely to come across the 2017 Chevrolet Camaro. You shouldn't pass up the chance at a test-drive. With new hardware underneath and multiple available engines, you might be surprised by the Camaro's newfound levels of handling and performance.”

You’ll find a variety of different powertrain options in the 2017 Chevy Camaro, each delivering commanding performance and surprising degrees of fuel economy. The base engine is a turbocharged 2.0L inline-four that’s capable of dishing out 275 hp and 295 lb-ft of torque to the rear wheels while getting an EPA-estimated 31 mpg highway and 22 mpg city. There’s also an available 3.6L V6 and a 6.2L V8. Rounding out the lineup is a supercharged 6.2L V8 engine on the all-new Camaro ZL1, which can pump out an unbelievable 640 hp and 640 lb-ft of torque. 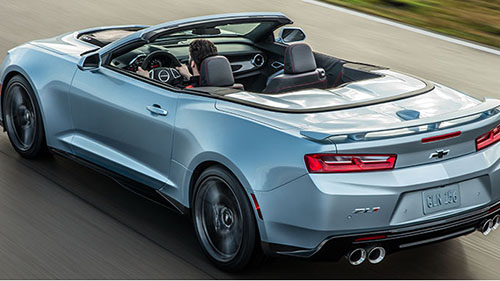 “It's leaner, meaner, and true to its heritage as Chevy's emphatic response to the Ford Mustang… [T]he Camaro is demonstrably better – quite literally from its now-lighter core. Don't be fooled by its familiar looks, and definitely, do not overlook the V6 model. We're glad we didn't."

The new Chevy Camaro generation boasts differences that go beyond the level of performance. From OnStar telematics and 4G LTE Wi-Fi coverage to the Chevy MyLink touchscreen interface with Apple CarPlay and Android Auto, you’ll enjoy lots of creature comforts and connectedness inside your high-performance coupe or convertible.

“Adjustable magnetic shocks are standard, as is the electronically controlled limited-slip and the Recaro race seats. The exterior has been extensively reworked in the wind tunnel and on the Nürburgring to improve aerodynamics and features a big front splitter and rear wing, new rockers, wider front fenders, new underbody panels, a larger lower grille for more airflow, new front brake-cooling ducts, and a new hood with a carbon-fiber vent.”

In praising the four seat ZL1 model, Motortrend highlights the redesigned exterior of the Camero. These changes are both aesthetic as well as practical, updating the bold, muscular look of the vehicle while providing top of the line performance.

Get Ready to Test Drive the 2017 Chevrolet Camaro

It’s nice to read what the critics are saying, but when it comes to choosing a high-performance sports car you’ll want to check it out for yourself. Tom Gill Chevy has the 2017 Chevy Camaro on sale now. Contact us to set up a showing and test drive, or simply stop by our dealership at 7830 Commerce Dr. in Florence, KY.