Does the 2016 Ford Mustang Have Enough Power? 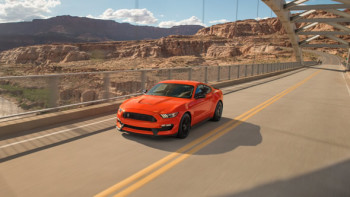 For Cincinnati-area drivers in the market for a genuine American muscle car, a few important names come to mind. One of the primary contenders in this segment, year in and year out, is the 2016 Ford Mustang. However, the 2016 Chevrolet Camaro comes fully redesigned this year, bringing with it an impressive array of powertrains to make it a top competitor in this segment. See how these two iconic American muscle cars stack up to one another in the all-important performance department.

The 2016 Ford Mustang’s most powerful engine option is a 5.0L V8 that comes fitted to a six-speed manual or six-speed automatic transmission. It puts out a fairly impressive 435 hp and 400 lb-ft of torque, which allows it to move to 60 mph in a relatively swift time of 4.7 seconds.

Those numbers pale in comparison to what you can get from the 2016 Chevrolet Camaro, though. The most powerful powertrain in the Camaro lineup comes fitted to SS models. It’s a 6.2L V8 engine, which—like other versions of the Camaro—comes mated to a six-speed manual or an eight-speed automatic transmission with steering-wheel-mounted paddle shifters. Total output from this V8 is a robust 455 hp and 455 lb-ft of torque, enough for this model to rocket to 60 mph in an impressive 4.0 seconds.

The 2016 Chevrolet Camaro has been redesigned this year with a wide wheelbase measuring 110.7. A wider wheelbase means greater control and maneuverability behind the wheel, as well as a more imposing presence on the road. Compare the Camaro’s standard wheelbase to the 2016 Ford Mustang’s wheelbase of 107.1 inches. Additionally, the 2016 Chevrolet Camaro’s base trim comes with standard 18-inch alloy wheels, while the 2016 Ford Mustang’s base trim only gets 17-inch alloy wheels. The Camaro also boasts a sophisticated and adjustable sport-tuned suspension system that delivers responsive handling in almost any condition. 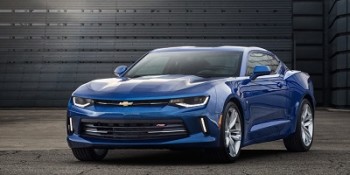 While the primary consideration of most muscle car shoppers is how it’s going to burn rubber on the track, having a vehicle that’s also equipped with modern conveniences is a big bonus worth considering. While both of these vehicles come with modern amenities like Bluetooth connectivity, keyless entry and start, and a rearview camera, there are a number of perks exclusive to the 2016 Chevrolet Camaro. These include standard Android Auto and Apple CarPlay smartphone integration, as well as Chevrolet’s OnStar telematics system with 4G LTE Wi-Fi.

Making your pick on a new muscle car calls for getting behind the wheel. You can check out the 2016 Chevrolet Camaro in person today at Tom Gill Chevrolet, located at 7830 Commerce Dr. in Florence, KY. You can contact us directly at (855) 977-0189 with any questions!

0 comment(s) so far on Does the 2016 Ford Mustang Have Enough Power?