The 2015 Chevrolet Trax: Trims and Features 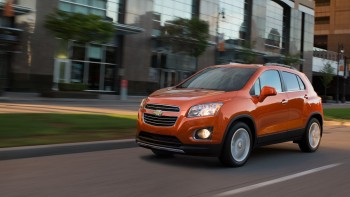 The introductory 2015 Chevrolet Trax LS has a number of standard features, from basics like air conditioning and full power accessories, to storage and seating options like a 60/40-split fold backseat and a front-folding passenger, to electronics like the Chevrolet MyLink interface, which integrates smartphone apps on a seven-inch touchscreen. Incorporated is the OnStar telematics system, offering 4G LTE Wi-Fi to convert your Trax into an Internet hotspot for up to seven devices.

Adding roof rails for storage and a compartment under the passenger seat in the front, the 2015 Chevrolet Trax LT offers versatility and space. Convenience features like cruise control and a remote ignition with the key fob are standard, and electronics include the OnStar RemoteLink app, which allows you to monitor your car’s welfare from your smartphone or tablet. Tack on the optional Plus package for rear parking sensors, as well as luxury features like a leather-bound steering wheel and power driver’s seat. A Sun and Sound package is also available for a sunroof and Bose audio system.

Explore the 2015 Chevrolet Trax trims and features in greater depth by visiting Tom Gill Chevrolet, located at 7830 Commerce Dr. in Florence, KY. And don’t hesitate to contact the dealership with any questions before you head over!

0 comment(s) so far on The 2015 Chevrolet Trax: Trims and Features