The 2016 Chevrolet Malibu is an IIHS Top Safety Pick+ 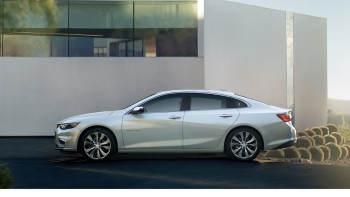 The 2016 Chevrolet Malibu is a standout midsize sedan for countless reasons, largely because it was redesigned this model year. This redesign helped propel the latest Malibu to earn the esteemed distinction of Top Safety Pick+ from the Insurance Institute for Highway Safety (IIHS). Discover what went into receiving this award, and learn all the ways the 2016 Chevrolet Malibu keeps you and your family safe.

Why the Malibu Won This Award

The Top Safety Pick+ award is distributed only to cars that place an exceptional emphasis on safety. In the case of the 2016 Chevrolet Malibu, the IIHS gave it this award because for the first time, the Malibu comes available with front-crash prevention systems, including automatic braking. This aided the midsize sedan to earn superior ratings for front crash prevention, all contributing to this top honor.

Along with its IIHS distinctions and ratings, the 2016 Chevrolet Malibu was also assessed by the National Highway Traffic Safety Administration (NHTSA). The Malibu received top scores of five stars in government front and side crash tests, as well as four stars in the rollover crash test. These figures led to the Chevrolet sedan earning a top five-star overall safety rating.

If you’re like most drivers, safety is a top priority when you’re considering purchasing a car. That makes the 2016 Chevrolet Malibu an ideal candidate, and definitely one you should tour and test drive. You can do so at Tom Gill Chevrolet, located near Cincinnati at 7830 Commerce Drive in Florence, KY. Feel free to reach out if you have any questions!