What are the 2015 Chevy Impala’s Safety Features? 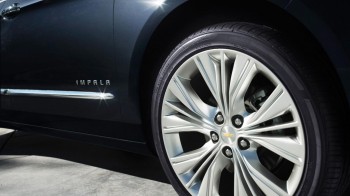 The new 2015 Chevy Impala, available from Tom Gill Chevy, is a stylish and smart choice for drivers in the Cincinnati and Florence area. It is more than just a good-looking car; it is a safe one, sure to protect you and your loved ones during your travels. It comes equipped with a variety of standard safety features, with the option to upgrade to additional safety features, and has a high crash test rating from both the IIHS and the NHTSA.

All models of the 2015 Chevy Impala come standard with the following safety features:

The new 2015 Chevy Impala available from Tom Gill Chevy gets excellent safety ratings from both the NHSTA and the IIHS, sure to please drivers in the Florence and Cincinnati area. The NHSTA’s overall safety rating is five out of five stars, with five stars for the individual areas of frontal barrier, side barrier, and side pole crash ratings. Both the front seat and the rear seat earned five stars as well. The NHSTA gave the 2015 Chevy Impala four stars for the rollover rating as well, estimating the risk of rollover in a crash to only be 12.1%.

The IIHS also gave similarly high ratings, rating the crashworthiness of the vehicle for moderate overlap front and side as good: their highest rating in both categories. In both IIHS tests, proper airbag deployment was observed and injury measures were also good. It can be determined from both the IIHS tests and the NHSTA tests that no matter which model of 2015 Chevy Impala you choose, you will be making a wise decision when it comes to protecting your family. Stop by Tom Gill Chevy and check out our selection today!

0 comment(s) so far on What are the 2015 Chevy Impala’s Safety Features?