What to Know about the 2017 Chevrolet Bolt Driverless Vehicle 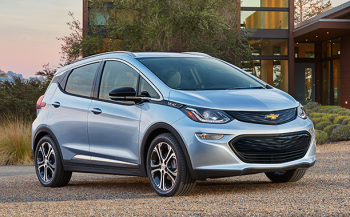 Back in the day, TV shows like The Jetsons caused us to believe that we’d be driving flying cars by now. While we may not be cruising around the sky, we are one step closer to having cars that drive themselves. The 2017 Chevrolet Bolt is not only an extremely impressive electric vehicle, but General Motors is currently using it to test autonomous driving.

The New Driver-Friendly Bolt is Out This Fall

The 2017 Chevrolet Bolt is set to hit the market this fall. While all details on this vehicle haven’t yet been released, we do know it will be able to travel more than 200 miles on one charge. It is also rumored that the starting MSRP for this new electric model will be less than $30,000, making it one of the most affordable electric vehicles on the market today. The style will be kept simple, with subtle roof rails and a taller height. The front quarter windows are also larger in size, and the floating roof will capture attention.

A Driverless Bolt is Being Tested in San Francisco

What’s most impressive is that GM partnered with Lyft in order to design a self-driving vehicle, and the 2017 Chevrolet Bolt has been seen driving around San Francisco without a driver.

GM will not talk much about going driverless, but plenty of people have witnessed this vehicle being tested. Chances are that the 2017 Bolt will actually be the vehicle that GM uses in their partnership with Lyft. When the autonomous vehicles debut with Lyft—hopefully sometime in 2017—they will be equipped with drivers as a safety feature. The end goal, though, is to faze these drivers out and use only the self-driving vehicles.

If the Bolt is used as the first autonomous vehicle for the ride sharing program, it will bring a lot of attention to the new model and pave a new path for the future of driving. If you would like to stay up-to-date on the 2017 Chevrolet Bolt and its autonomous driving capabilities, visit Tom Gill Chevrolet at 7830 Commerce Dr. in Florence, KY.